This blog--- features Saafir, a Los Angeles resident Imam, and founder of  Islah LA. "Islah" which closely means; Revive, Renew, and Restore. It is a conversation with fun facts, his 3rd Experience model, and leadership experiences. Join us and (((share))) this talk with others. www.createavoice.org 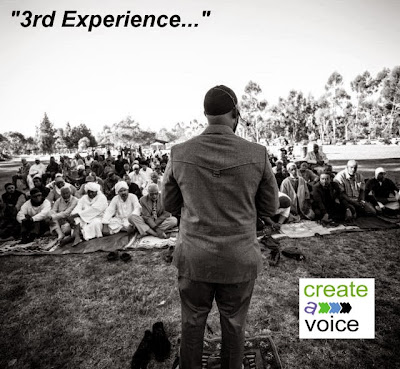 We operate within civic-social arenas between academia, , government, and simply among great people with compassionate-driven-visions. That's why it is hard to believe, who among people are holding harsh feelings towards Muslims (I know who, but still). As seen last night, during the State of the Union address, it's only a few hecklers who are utilizing major resources to spread negative propaganda, about Muslims to the masses. Like President Obama, we have a comeback! May our Creator accept our deeds and community services, where we assist local governments in hard to reach areas. Shalom, Salaams, and Peace! #tikkunOlam

Why Narrative of Muslim America?

U.S history has documented various Islamic narratives, even before the Trans Atlantic Slave Trade. Today most Muslims in the United States would like to claim "We have the oldest mosque in America, Our organization has been established since..." or my favorite "We were the first to establish it here.."

Regardless of claims Al Islam was first recognized as an Earthly way of life, as stated here "This day have I perfected your religion for you, completed My favour upon you, and have chosen for you Islam as your religion." Al Ma'idah 5:3 In the Holy Qu'ran an Islamic text, Allah (the proper Arabic word for God) represents Himself as the One Who solely established this Earthly way of life.

Based on the above Qu'ranic statement, which established an identity for many people throughout time. Today, minds are wanting to know Who are Muslims, and What is their history in the Western World; which brings us to this blog-ver-sa-tion ~ Narrative of Muslim America™ .


Our Intention with Narrative of Muslim America

Create-A-Voice will feature this series about Muslim America. The objective is to ~ capture, own, and institutionalize our powerful narrative by asking empowering personalities for their thoughts.

I will open my network of various Muslims and Leaders who are leading extraordinary lives. People of different backgrounds, and occupations, who are all working to make a global difference. This Narrative, are simple conversations, and my intention is to spark the a media renaissance that establish our most powerful Muslim narratives ~ respectively.

#WisdomWed are thoughts for social conversation, sharing honest opinions, ideals, and your Wisdom. All of us have a value worth sharing; that may motivate another person to stop, continue and/ or begin a certain process of personal or leadership development. #tohavevision

West West and #WhoopWoop ~ Thank You!
Posted by Unknown at 12:00 AM