Every Thursday with Bertha Jordan


Remembering Occupy LA, when Los Angeles residents came together to protest for social justice. Los Angeles home to a gang culture and a history of riots, the very few times our city has formed solidarity. Many organizations and individuals lead different issues during OLA. On November 17th 2011, Downtown LA was shut down by protesters. This blog-ver-sa-tion highlight the courage and the first arrest of that day, the courage of a woman. read on.... 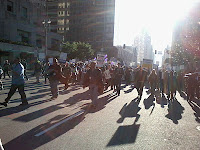 On Thursday November 17, 2011 the 99% protested the 1% in Downtown Los Angeles. People, signs and motivating chants marching for good jobs in Los Angeles and the Responsible Banking Ordinance. A peaceful march of solidarity for one purpose, "the right to exist."

Now meet Bertha Jordan, in the pic below an older woman wearing glasses, with the bini knit cap. Bertha Johnson an 82 year old African American woman, she was the first arrest that day.

What's important about this woman being the first arrest today, as Rosa Parks' role helped establish the Civil Rights Movement and now in our time of the Occupy Movement, another courageous woman is still protecting her children - speaking out against injustice, upon her natural leadership.

"I'm a senior citizen and I've been abused and misused," Jordan told reporters, before she was led away by police.usnews


Never met this woman personally. I just so happen to snap this photo while marching; not knowing in moments she was on her way to jail for demonstrating her Freedom of Speech and Right to assemble. When I saw her being escorting into custody, in my eyes I witnessed true courage.

Thank you Berth Johnson for continuing the legacy of strong women, who nurtured and protected many children and taught us to do what's right.

Thank you see you "Every Thursday" Be disruptive and you might be next.
Posted by Unknown at 12:00 AM